Skip to main content
It looks like you're using Internet Explorer 11 or older. This website works best with modern browsers such as the latest versions of Chrome, Firefox, Safari, and Edge. If you continue with this browser, you may see unexpected results.

The Power of Language in the Library: The Battle to Change the Subject Heading "Illegal Aliens": Home

Details and resources on how student activists urged the Library of Congress to change an offensive subject heading, Congress intervened, and the CSU Libraries responded.

What is a Subject Heading?

In short, a subject heading is a word or phrase that describes a source. Students and researchers use subject headings to help them determine what a book, etc. is about. You can also search for materials using subject headings. In this way, subject headings are similar to hashtags. In the example below, the subjects tell us this book is about dogs' behavior, dogs, and human-animal relationships. 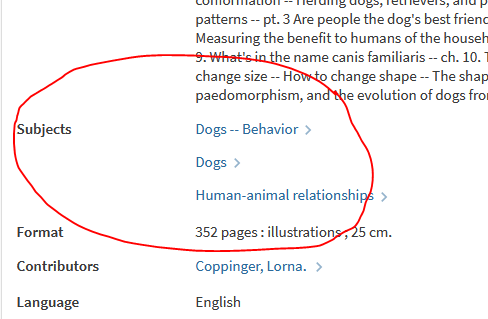 For consistency, many libraries (including CSU libraries) use subject headings determined by the Library of Congress for items in their catalog (what you see when you search OneSearch's "Books & Media").

A Brief Timeline of Events

February 2014. A Dartmouth student discovers the subject heading “illegal aliens” in her library’s online catalog. She shares this with fellow student activists of the Dartmouth Coalition for Immigration Reform, Equality, and DREAMERs (CoFIRED).

July 2014. CoFIRED works with Dartmouth librarians to create and submit an official subject heading change proposal. In it, they ask the Library of Congress to change “illegal aliens” to “undocumented immigrants.”

March 2016. The Library of Congress announces it will replace “illegal aliens” with “noncitizens” and/or “unauthorized immigration.” It states that “the terms ‘illegal’ and ‘alien,’ when used in reference to people, have undergone pejoration and acquired derogatory connotations, becoming increasingly associated with nativist and racist sentiments.”

January 2020. Recognizing that offensive and dehumanizing subject headings are “no longer appropriate for unbiased library cataloging that respects and reflects our diverse society,” the CSU Libraries replace “illegal aliens” with “undocumented immigrants” and “aliens” with “noncitizens” in records in its Unified Library Management System. The older subject headings remain searchable, but the new terms are displayed in OneSearch’s “Books & Media” options.

Change the Subject shares the story of a group of college students, who from their first days at Dartmouth College, were committed to advancing and promoting the rights and dignity of undocumented peoples.  In partnership with staff at Dartmouth, these students – now alumni – produced a film to capture their singular effort at confronting an instance of anti-immigrant sentiment in their library catalog.  Their advocacy took them all the way from Baker-Berry Library to the halls of Congress, showing how an instance of campus activism entered the national spotlight, and how a cataloging term became a flashpoint in the immigration debate on Capitol Hill.