For Ed.D folks to know the best places for research

The in-text citation needs the author and the year of the document.  The basic template looks like this:

Notice that the year always follows the author, and the page number(s) is always at the end. Number of authors and number of times cited is key to understand APA in-text

Et al. is an abbreviation of a Latin phrase that means "and others."
It stands in for two or more other names you haven't typed.

No Author (Not Anonymous, Not Corporate Author)

In “Title of Article in Quotation Marks and Title Case” (2017) 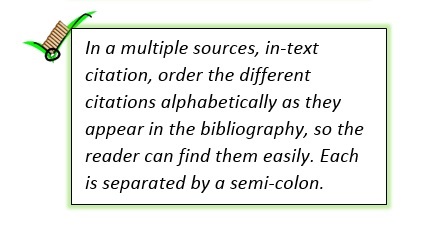 In a multiple sources, in-text citation order the different citations alphabetically as they appear in the reference list, so the reader can find them easily. Each is separated by a semi-colon.

Citing Someone Who is Being Cited by Someone

APA 7E makes a strong statement about paraphrasing almost everything. Any text that you are quoting exactly from the original should be enclosed in quotation marks, and the in-text citation should include a page number. As a courtesy, you may include a page number for a paraphrase from a long work, such as a book.

If you are making a very general reference to the overall subject of an article/essay, then you do not need quotation marks and you also do not need a page number. Examples of this are common in the introduction to research articles: